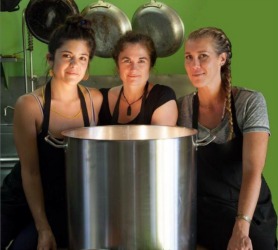 We’re lucky enough this time around to honor not one, but three women of the week! Magali Brecke, Rhiannon Henry, and Missy Woolstenhlume began Kitchen Witch Bone Broth here in Santa Cruz to address what they described as a lack of access to “basic, fundamental foods.” Their business is the result of a desire to blend a passion for food with societal impact and community engagement. Magali Brecke is one of the cofounders of Kitchen Witch Bone Broth, and she sat down with us to discuss the guiding principle of “food as medicine” and how their business came to be.

Magali and Rhiannon were both making bone broth in their own kitchens before starting their company with Missy. For Magali, it stemmed from her graduate program in Chinese Medicine and Herbology at Five Branches University, where she was making post-partem bone broths for women while also nursing her father through an ongoing illness. Because the process can take some time, many of her clients were unwilling to make it themselves, but they were clearly benefitting from its use.

Bone broth is more than just an emerging food trend; it has deep roots in health and nutrition. Bone broth is meant to be drank warm from a mug, like a savory cup of tea. With a more intense flavor than a typical broth, it gets its boost from a long, slow simmering of bones, meat, and water with herbs. The different types of bones, simmered with a high ratio of bones to water, yield a dark, rich, and gelatinous final product. In fact, each jar requires almost a pound of bones! As they simmer they release gelatin, the extracted form of collagen.

Drinking bone broth, either as-is or in soups and tonics, can help to boost the immune system, reduce inflammation and auto-immunity, and improve digestion. Essentially, it helps supply the body with needed nutrients and keeps our digestive system running efficiently.

Now, Kitchen Witch Bone Broth turns out five different broths: all-organic beef, chicken, turkey, ginger-pork, and an “almost veggie” broth made with unflavored beef gelatin so that even adventurous vegetarians can benefit. They partner with many local growers and ranchers, including Panorama Organic Grassfed for their meats. They can often be seen on the farmers market circuit teaming up with vendors such as Burn! Hot Sauce, Bread Srsly, and Booch Craft for giveaways. In addition, Magali teaches monthly in the New Leaf Community Kitchen Classroom, including hands-on courses about nutrition, anti-inflammatory lifestyles, and managing autoimmunity. These classes are a unique way to introduce people to Kitchen Witch’s products and help stress the importance of using whole foods and good ingredients.

By holding their product to such a high standard, Magali says there is a constant struggle to justify the elevated cost. Whenever possible, the Kitchen Witches work with local, organic vendors to make their broth. And each broth comes packaged in a thick, glass Ball jar. As they continue to scale up, the cost of shipping heavier, breakage-prone glass makes plastic alternatives look tempting. But the three women share an unwavering set of values with regards to their impact on the planet and on the bodies of their customers.

“We make the decision to uphold our values every single day,” Magali affirms. “We’d like to knock it down to make it more accessible, but to keep the integrity that is in every single jar, that is what it costs.”

And people seem to recognize and appreciate their integrity, because Kitchen Witch Bone Broths continue to move product and expand their offerings! Buoyed by a loyal clientele, the Kitchen Witches are now offering monthly “Gut Reset” cleansing programs.

“I tend to work with really sick people, and I needed a way to quickly get their inflammation down, get them digesting, get them feeling better,” Magali says, “But it was so effective we decided we should be offering it to the public as a service.”

Over five days, participants eat bone broth and bone broth-based seasonal soups—prepared by the Kitchen Witch team– to help to clean, clear, and soothe a tired and potentially toxic gut. The next gut reset begins in January, making it particularly appealing for New Years Resolutions and addressing holiday-based gluttony. What started as a side-hustle has become the part of their business they are most looking to grow in the future.

Going forward, the team also hopes to other expand to other west coast cities, including Los Angeles, Portland, and Seattle. But their deep roots in the Bay Area continue to support the base of their business. When they were starting out, it was local businesses which approached them about selling their products.

“Our community here in Santa Cruz and in the Bay Area has been everything. We get to touch-in directly with people locally and we see how loyal people are. We get to offer our loyal community new things that we’re trying, and they give us feedback. Both verbally, but also with their buying power and their dollars.”

For more information on their products –including where you can buy them—you can visit their website and Instagram.