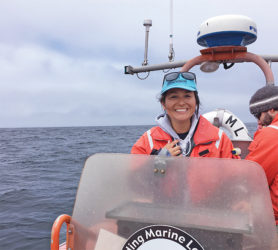 To hear her talk about it, you might not guess that Brijonnay Madrigal is actually a practicing marine scientist with a successful new outreach project.

“I’m really not a science and analytical person,” she says as she leans in conspiratorially. “I was a dancer and a singer when I was young. Very creative, very right-brain. And I have to work really hard to be scientifically-minded.”

But in Listen Up!, her new K-12 science outreach program, Bri channels her experience in both science and communication to bring marine science into local classrooms. Using her research background in marine mammal acoustics –the way whales, dolphins, and seals or sea lions use sound to communicate—Bri is able to highlight greater themes of ocean conservation and engage future generations of voters and decision-makers.

“I felt like mammals weren’t something we talked about a lot, but were something that could allow kids to really connect. If you’re talking to kids that haven’t been exposed to the ocean,” something Bri says is alarmingly common even this close to the coast, “the things they have been exposed to are oftentimes large marine mammals.”

In looking at her background, it is perhaps clear that Bri was headed towards a career in science education. She graduated from the University of Hawai’i at Mānoa with a B.S. in Marine Biology and a B.A. in Communication prior to pursuing her masters locally at Moss Landing Marine Laboratories. In addition, she works as a volunteer coordinator at the Sanctuary Exploration Center, which she credits as useful in developing her outreach program.

“I had always wanted to combine the two –the science and the communication– because science is a passion and I love doing research. But communication is essential and there is really a disconnect between science and the public.” She points here to the lack of emotional investment in the ocean as a symptom. “If we want people to understand, if we want to empower people to make changes in their lives that benefit the ocean, they need to understand why. It’s hard to love and protect something you know nothing about.”

While she works with students K-12, Bri has created four separate curriculum to better engage with different classes. As a result, high school students are taken much deeper into the science than a class of kindergarteners. But in each case, the goal is to engage the senses and stir a passion for ocean health and conservation. In choosing to highlight local species found in the Monterey Bay, Bri is able to continue her desire to keep the message local.

In each session, students begin by learning basic mammal biology and how senses differ between air and water. With assistance from the Moss Landings Marine Lab’s museum, Bri brings samples of krill, baleen, and skulls to give students a tactile experience. As she discusses each topic, she plays sounds –many of which she has collected—and walks students through the ways that acousticians use these sounds in their research. She has also developed several activities, including a “listening device” she designed using a soda bottle to show the transition of sound in water and a Marco-Polo-esque game that mimics echolocation.

“Some of these acoustic concepts can be hard for younger kids to grasp, but having activities like these brings it to a place where they can experience it themselves. By the end of the games, the younger kids will be cheering and jumping. It’s great to see them so involved and excited.”

Even as she gets her program off the ground, Bri is already looking ahead. It is important to her that the program remains free to educators, particularly because she wants to target low-income school districts with large minority populations. All schools, regardless of funding, should be able to take advantage of this shared resource. Ultimately, she says she would like to be able to charter with local whale-watching companies to allow students to see the animals she works with in their natural habitat.

Bri is currently scheduling visits for Fridays in the coming months. If you are interested in having her come speak in your class, send her a message at [email protected] In addition, you can learn more of her outreach work by reading her recent writeup on Listen Up! or by attending Moss Landing Marine Laboratory’s Open House on April 27-28, 2019.