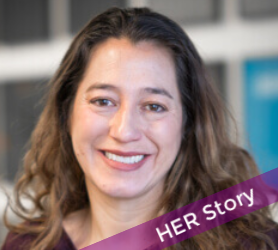 It’s hard to live in Santa Cruz without hearing about Looker, even if you don’t understand what it means to be a data platform company that deals in big data analytics. But perhaps we can all agree that data touches many parts of our life. From the targeted ads we see to the way a business presents itself, companies are using information about the industry, the market, and the consumers to set their priorities and goals.

In this way, Looker is a company that helps other businesses harness their data to make better decisions. Currently used at more than 1600 companies such as Sony, Amazon, The Economist, IBM, Spotify, Etsy, Lyft, and Kickstarter, they’re no small name in the tech world.

It can be difficult to separate the people from the business, but Looker is truly populated by a diverse and vibrant staff. Ask anyone who works there what they appreciate about Looker and they will likely answer with a sentiment shared by this week’s featured woman:

“I admire the founders and the culture they brought to Looker. Having worked in Silicon Valley and in tech for over two decades, I can say there’s honestly nothing like it. The values they promote are not just there in words, they’re there in practice and we are living them every day.”

Tricia Timm was recently hired as General Counsel at Looker. As a lawyer who specializes in technology-focused companies, it is her job to guide Looker through its legal obligations as it expands and evolves.

But when asked what she took the most pride in during her first year, she was quick to point to her efforts to increase diversity and representation in the company. In addition to her position as General Counsel, Tricia is also an Executive Sponsor for Diversity, Equity, and Inclusion (DEI). Her passion for DEI is realized in her conduct; as a graduate of Santa Clara University of Law, for example, she continues to mentor law students through the Entrepreneur’s Law Clinic.

What began as a grass-roots effort within the company –led by Timm and a handful of other women—has solidified into a company-wide mentality. Looker recently hired Cornell Woodson as the Global Head of DEI, and together they are working to implement new initiatives. This week’s feature coincides with the launch of their new DEI website, which highlights the various projects underway at the company.

Working off a definition of diversity as “the existence of multiple social identities and lived experiences in society or a space,” these initiatives aim to give space for people to share their stories and to confront hard truths in a constructive atmosphere.

Looker Institute offers seminars on topics such as unconscious bias in the workplace. By considering each office separately, solutions can be tailored to address local issues. In their Dublin office, for example, they are working to address a gender imbalance in their hiring, while in Santa Cruz they work to promote greater ethnic representation. Within each office, Looker Groups draw from the success of employee resource groups (ERG’s) to provide common spaces where people can be amongst people who are like themselves. Cornell points to the importance of shared experience as a reason why ERG’s are so successful:

“While it’s good to expose yourself to different perspectives or experiences, sometimes you just want to be in a space where you don’t have to explain, with people who just understand you.”

But these initiatives are also a celebration. Looker Stories and Looker Pride turn inward to highlight employees and their journeys. Each month, people speak to their personal experiences during informal lunchtime chats. Holidays and cultural events such as Lunar New Year and Black History Month are addressed in the context of the identities they support. By continuously speaking with employees, they hope to evolve their definition of diversity and what it can look like within their company.

In keeping with the idea of “living your values,” Tricia points to the importance of linking practice with business.

“Ultimately, when our clients look at Looker, we want them to think of diversity, equity, and inclusion as a foundational element to our business.” For more information, you can connect with Looker on LinkedIn, Twitter, Facebook and YouTube or visit looker.com. And of course, be sure to visit their new Diversity, Equity, and Inclusion website for more information about the company’s initiatives.