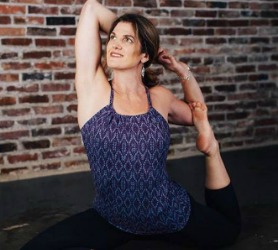 Twin and techie-turned-yogi, Robin Penney was born in Seattle and has lived in Georgia, Texas, Colorado, the Bay Area, Bermuda, Eastern Canada, and now Santa Cruz! She moved here two and a half years ago with her husband Mark, whom she met in Bermuda, and their two kids.

“We LOVE Santa Cruz. What’s not to love? We are still in the honeymoon stage with the fabulous weather after all the cold Canadian winters.” They chose Santa Cruz for its relaxed vibe and proximity to both nature and urban areas. “My hubby is a wine geek, so we’ve had a blast exploring the Santa Cruz Mountain Wine Country. Also, the TREES. I forgot how grounding trees make me feel, and there are amazing trees here.”

Robin worked as product manager at a software company for almost 17 years, and before that she was an auditor. Working in software felt creative and fun for a long time, but it was stressful. Detached from her feeling of purpose, she found her way to yoga and subsequently, to teaching it. A busy mom of two, she felt she needed to make sense of her life in a new way, and yoga continues to provide that for her. Robin’s software job eventually turned into a part-time gig as her yoga teaching career began ramping up. And last summer, she took the leap of leaving her job behind to completely focus on teaching yoga.

She teaches private, one-on-one sessions and she leads drop-in group classes at Luma Yoga, as well as teaching private groups who want special classes. By complimenting her in-person teachings with online practices, her students are able to build a personal practice, “Practicing on your own versus with a teacher are different experiences, and online teaching won’t ever replace the connection you can have when you’re in person, in that face to face student/teacher relationship. But there is room for both in our practice.”

Robin says that her yoga teaching career was welcomed by the Santa Cruz community, especially the DiscoverHER tribe. “The community of Santa Cruz is full of interesting and conscious people, so it’s a wonderful place to have landed.” She attended a Dream Big event and met one of the speakers there, Amber Campion, who happened to be another yoga teacher. She ended up subbing Amber’s class at Luma Yoga, quickly taking on her own classes. “The rest has grown from there.”

She says her biggest challenge has been believing in herself and feeling confident in sharing what she’s passionate about. “As a teacher, your voice is what your students will hear for the next hour or more, and it’s really important that I give them attention, calm, inspiration, energy, permission, ease, motivation and clarity. It’s a lot to deliver, and as a person who used to get extremely nervous in public speaking situations, the fact that I do this everyday amazes me sometimes. I was seriously that girl who would break down in tears or run off the stage because it was too much.”

How did she get over her fear? She leaned INTO it instead of fighting it—acknowledging it and being with it—she took her practice off the mat. And guess what? She hardly ever gets nervous now.

Skills that are vital to success for Robin are learning, listening, single-tasking, knowing when to say “no” and when to say “yes,” and getting out of her own way. She values having a dedicated personal practice, journaling with an interest in exploration and maintaining a clarity of vision. Restorative yoga, coffee, smoothie bowls, walks along the ocean and in the redwoods, sleeping, exploring the city and watching a good movie are all ways that she allows herself to take breaks when she needs them and use her energy when it’s present.

Robin will be teaching some of the modules in Luma Yoga’s 200-hour Yoga Teacher Training program this spring, and she’s continuing to develop her online offerings. She currently has dozens of classes (from 5-minute guided practices to full length classes) that are available as part of her online studio membership, as well as courses that help students work on specific postures, including arm balances (which she loves). Free videos and a Foundations of Flow series for beginners are available on her website. She’s also working on a certificate in Postnatal Fitness, and has an upcoming retreat in Southern Spain this September, followed by Costa Rica in February 2019. 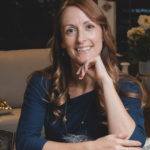