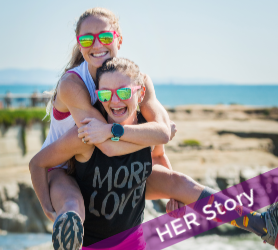 In talking to Melissa McConville, the feeling that comes across is gratitude. Gratitude that perceived failures could open doors to new opportunities, gratitude to be surrounded by a supportive community, and gratitude to have found a perfect business partner in her sister, Sara Tanza. Together, they started She is Beautiful, the annual 5k/10k race held in Santa Cruz which hugs the coast and prompts women of all levels to celebrate their successes.

What began as an affirmation written on a piece of paper, “I want to put on an all-women’s race where all women will be welcome,” culminated in an inaugural race in 2011 with 500 participants. Now in its ninth year, She is Beautiful routinely draws up to 6,000 runners. It is truly a rallying point —an event by women and for women—where we can reassess our relationships with ourselves and our communities.

“There’s something really incredible about being around women of different walks of life. In so many spaces we’re supposed to be competitive with each other, but I wanted to create a space where we’re supporting each other and not basing our own worth on comparisons. For me, running is a feeling of beauty. That’s where the name of the race comes from. Beauty is a feeling, and I feel the most beautiful when I’m running.”

A Santa Cruz local with a degree in Psychology from UCSB who has been running for much of her life, Melissa understands perhaps more than most the motivations and benefits of getting those miles in.

“People run and do races not necessarily because they love running, but because it’s serving a deeper purpose. They want to feel good or they’re trying to process something or because they want to connect more with themselves or with nature.”

During her time working in marketing for Whole Foods, Melissa learned how to plan events and create active partnerships with local organizations. Ultimately, it helped her shape the vision for what her race would become. Which —and she will tell you herself— is essentially a huge party.

“This event is just so incredibly welcoming. You show up at the start line and you almost forget that you’re at a race. This year we’re starting off with a Worthiness Rally, which I really want to feel like a Beyoncé concert.”

While the race itself is done in a single morning, maintaining this event has become a full-time project. Melissa and Sara are constantly working to expand their network of support. In the months leading up to the race, they host several community meet-ups for training and encouragement. During the rest of the year, they host on online Mileage Club which allows women worldwide to receive advice and motivation. And for the more competitive runners, Melissa recently co-founded and launched an intermediate running group called Arete, the name of which draws on the idea of balance in life.

In addition to the race, Melissa was always eager to include community impact in her business model. From year one, she has partnered with the Walnut Avenue Women’s Center to create Team Walnut Avenue, a group of runners in the race who solicit donations and sponsorships that feed directly back to the Center. After setting an initial goal to donate $100,000 by year ten, they are now set to exceed their goal during this year’s race.

There are still a small handful of spots, but be sure to sign up soon as the next race is March 23rd! If you are interested in participating in a local meetup, you can visit their website for more info. And of course, if you just want a little motivation to spruce up your feed, you can follow She is Beautiful on Facebook, Instagram, and Twitter.