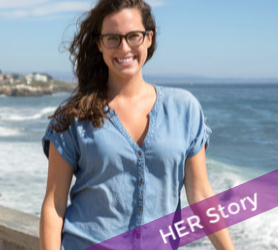 We recently celebrated Earth Day, and hopefully you’re still riding the (plastic-free) wave of how fortunate we are to live in such a beautiful place. Spoiled by the beauty of beaches, mountains, and rivers, residents of Santa Cruz generally make attentive custodians of our natural resources.

Melissa Cronin, our Woman of the Week, was a college student in New York city –a far cry from our city nestled near the sea—when she decided to pursue environmental journalism as a career. Rather than a scientist who ultimately wished to improve her communication skills, Melissa worked for years as a freelancing journalist before landing in the Coastal Conservation Action Lab at UCSC to complete her PhD.

Originally, she was an English major at NYU who discovered a belated love of nature documentaries. Many of us have those moments –a childhood memory of Steve Irwin or a visceral reaction to hearing David Attenborough’s voice—and for some they are catalyzing. They were enough to prompt her to change her major to Environmental Science and Journalism.

While she had always loved writing, Melissa says she hadn’t necessarily considered pairing it with causes that mattered to her most; wildlife trafficking, environmental justice, the moral obligations of large corporations. But, she found that clear writing about engaging stories could in fact change public opinion and behaviors.

“Writing seemed like a great way at the time to affect change. Science is very important in that regard as well, but it seemed much slower. To me, writing was a bit more bang for your buck.”

She references a particular series of pieces in which she worked with an advocate to expose illegal wildlife being shipped through UPS. The consumer backlash was so extreme that UPS in turn pledged to crack down on this illegal use of its services.

After graduating, Melissa dove into the world of rigor and reward that is freelancing in a major city. Her work has appeared in Slate, Gawker, The New York Times, Huffington Post, Grist, Narratively, VICE, Popular Science, Motherboard, The Dodo, and others, and she is currently a National Geographic Young Explorer. Through her career, she has had frank discussions with powerful figures in environmental science, including primatologist Dr. Jane Goodall, environmental thinker Bill McKibben, Sea Shepherd Capt. Paul Watson, and food movement activist Gene Baur.

Melissa eventually founded Potluck Magazine with some of her friends as a natural extension of their gatherings with other local writers and journalists. While they referred to them as “poetry readings,” they were really common spaces to share works of fiction, nonfiction, poetry, and art. And yes, they often involved potlucks.

“We had all these amazing friends, and we really just wanted a place to showcase their work.”

As the founding members have moved on to full-time careers, Potluck has adapted to serve as a performance hosting group for events such as the upcoming FishTales, being held at the Food Lounge on May 3rd.

FishTales is a live storytelling event where scientists, artists, fishermen, and writers entertain visitors over beer and sustainably-sourced seafood. Each story, read aloud by their writer, touches on the recognition that stories about science and nature can be both entertaining and relatable.

“Especially now, when a lot of natural systems are threatened by people who don’t understand their value, using compelling communication is more important than ever. Storytelling is this really powerful medium. Everything is a story, and the way natural systems look is all the result of human stories.”

Now in its third year, FishTales promises to be a joy. Co-hosted by the Santa Cruz-Monterey Bay chapter of the American Fisheries Society and GradLab, the event will feature seafood caught by local CSA Ocean2Table and prepared by chef Diego Felix of Colectivo Felix. This focus on community and bringing people together is central to the original intent of FishTales.

“People really seem to love the idea. And I think it’s because it’s accessible and they get to meet people they would never interact with. Like a fisherman meeting a scientist or an artist meeting a fisherman. It’s great to see scientists, who don’t normally use that type of storytelling medium, flex those muscles.”

You can read more of Melissa’s work on her website and follow along on her journey through Twitter and LinkedIn. In addition, there is still time to reserve tickets for FishTales. If you are keen to learn more about our natural resources from the people who work hard for their protection, we look forward to laughing with you.